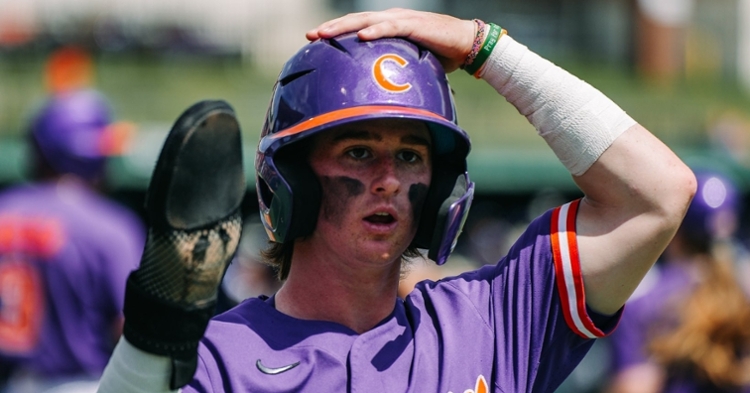 CLEMSON, SC –
Caden Grice went 3-for-4 with two homers, a double and season-high six RBIs in Clemson’s 12-9 victory over No. 21 Georgia Tech at Doug Kingsmore Stadium on Saturday afternoon.

In the first inning, the Tigers (30-17, 8-14 ACC), who took a 2-0 lead in the series, plated five runs after a costly leadoff error. Bryar Hawkins ripped a two-run double, then Dylan Brewer lined a run-scoring single. After Jonathan French‘s squeeze bunt scored a run, Grice lined a run-scoring double. Tim Borden II led off the second inning with a homer to put Georgia Tech (27-20, 12-14 ACC) on the scoreboard.

Austin Gordon (1-0) earned his first career win by tossing 3.0 innings in relief. He allowed three hits, four runs (three earned) and one walk with three strikeouts. Tiger starts Geoffrey Gilbert gave up just one run in 4.0 innings pitched. Ammons recorded the last out to register his seventh save of the season. Georgia Tech starter Marquis Grissom Jr. (2-5) suffered the loss, as he surrendered eight runs (five earned) on six hits in 4.2 innings pitched.

The series concludes Sunday at 1 pm on ACC Network Extra.

LET’S GO BREWSKI !!! @ dbrewski3 knocks in another run to extend the lead to 3!

The Tigers are on the board !!!!@ bryarhawkins5
ropes a double down the line to score Benjamin Blackwell and @ willtaylor_10

Benjamin Blackwell makes a diving stop to get the lead runner out at second.

The sophomore slugger belts his 10th homer of the season. ??

.@ClemsonBaseball doing a total demolition job on Georgia Tech for the second-straight day. When Clemson is right, it can be very good. https://t.co/cGAEfDpSi4

TWICE AS NICE !!!! ??@ CadenGrice3 hits his second homer of the day and now has six RBIs in the contest.